Apple, Tree: Writers on Their Parents 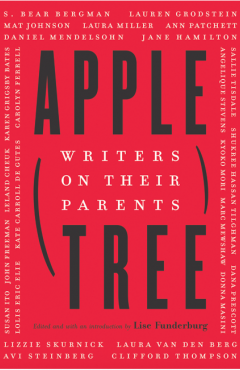 “A sparkling anthology…These essays, in addition to being resonant in their own right, will also move readers to recollect stories of their own parents.” — Publishers Weekly (starred review)

“Funderburg, who has explored her own parents and background in her memoir Pig Candy, here gathers pieces from writers about a trait they’ve inherited from a mother or father. Ann Patchett, Daniel Mendelsohn and Laura van den Berg, among others, meditate on how attributes both physical and spiritual tie us to and distance us from our elders.” — Bethanne Patrick, Washington Post

“Undoubtedly, parents influence us more deeply and irrevocably than any other people in our lives. The apple, after all, doesn’t fall very far from the tree. This topic is given its rich and thoughtful due in Apple, Tree: Writers on Their Parents, an engrossing anthology of 25 delightfully diverse personal essays.” — Laurie Hertzel, The Star Tribune