Friday Night Lights: A Town, A Team, And A Dream 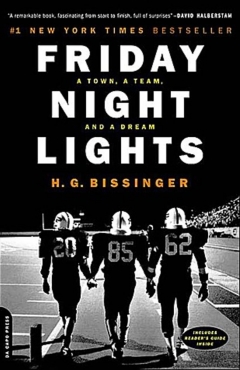 “Mr. Bissinger, to his credit, looks unflinchingly at the racial turmoil of this doggedly conservative community where teen-age football players are treated ‘like privileged children of royalty,’ or what passes for royalty in Odessa. It is a tricky balancing act, but Mr. Bissinger carries it off: Friday Night Lights offers a biting indictment of the sports craziness that grips not only Odessa but most of American society, while at the same time providing a moving evocation of its powerful allure.” — The New York Times

“[An] inspiring story about a small town and it’s unbelievable football team. Starring unforgettable characters in a setting you'll never want to leave, this is a must-read for true fans.” ― Bustle.com

“About more than football. Buzz Bissinger’s story about the 1988 Permian High School Panthers football team from Odessa, Texas, is a critical look at the impact of high school football on a football-crazed community. It’s not but about 365 pages long...but sometimes, even in the fall and winter, you need a brisk read that’s not too heavy.” ― Arkansas Democrat Gazette