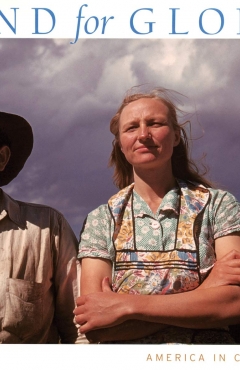 “Taken from 1939 to 1943 under the auspices of the Farm Security Administration and the Office of War Information, these 175 ‘lost’ photos feature shots by Russell Lee, Andreas Feininger and Marion Post Wolcott, using the then-revolutionary technology of Kodachrome film. Color photographs taken before 1939 have largely deteriorated, so these surviving photos are later than the most familiar b&w Depression-era shots. This 11¾”×8½” volume thus ‘colorizes’ one's normally black-and-white impressions of a very vibrant time, as Hendrickson (Sons of Mississippi) notes in his introduction. The logic behind the arrangement of the photos, which at first seems largely random, as it follows neither photographer, location nor chronology, becomes clear by the end of the book: the U.S.’s industrial rise. Images of urban lethargy and farmhands picking cotton under hot blue skies (the unbearable conditions of cotton-picking somehow seem more apparent in color) gradually give way to images of mobility, mechanization and a changing economy.” — Publishers Weekly

“Affectionately and analytically introduced by journalist Paul Hendrickson, [these color photographs] show farm people and rural life in far-flung corners of the U.S., then urban workers and workplaces, then wartime work and workers. Masterly and powerful as their monochrome siblings, they are as complexly delightful, not least because they boost the documentary reputation of the most popular painter of their time, Norman Rockwell; the faces in the photos look just like those in his paintings.” — Ray Olson, Booklist