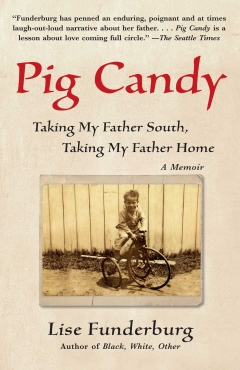 “If you’re after a memoir pure and simple—a life exposed with intelligence and feeling—you could hardly do better than Pig Candy, in which Lise Funderburg takes us down to Monticello, Ga. (pop. 2,500), the place her father, a light-skinned black man, had escaped from, the place he came back to in his prosperous late middle age. The story is built around her father’s attachment to his 126-acre farm — an attachment that grows stronger even as metastasized prostate cancer weakens him. Pig Candy—the title refers to barbecued pork—wears its somber themes lightly. Yes, it’s about mortality, race and filial duty, but Ms. Funderburg never lectures, never preaches, never prettifies. She unspools her story with quiet candor and an unpretentious faith in the significance of what she has to say.” — Adam Begley, The New York Observer

“With Pig Candy, Lise Funderburg has achieved something very remarkable in contemporary memoir: a personal narrative that is crisply intelligent rather than cleverly self-satisfied, deeply and meaningfully emotional rather than soppily sentimental. Even better, she has used her considerable powers — of private observation, of social empathy, and of historical imagination — to transform an already gripping personal narrative into an overwhelming parable about race, family, and mortality. A wonderful book.” — Daniel Mendelsohn, author of The Lost: A Search for Six of Six Million