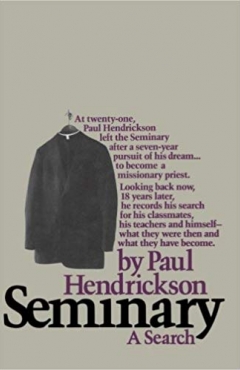 “‘The conservative figures, from Rome, report that 13,440 priests worldwide formally left the priesthood between 1964 and 1970, which were the principal years of chaos following the Second Vatican Council,’ writes the author, who put in seven testing years at Holy Trinity Seminary, first in rural Alabama and then in Virginia. This book is his attempt to explain the exodus. Hendrickson, whose father was an airline pilot, followed an older brother into the seminary, the nuns in grammar school having singled them out as prospects for the priesthood. Paul went, got a splendid education, and learned to accommodate to the harsh, irrational discipline until a severe nervous stomach forced him to quit. Now, more than a dozen years later — after all his 20 classmates but one have dropped out — the author has gone back and looked up old teachers and students to see why they failed. Or was it the church that failed them? Among the classmates Hendrickson, a Washington Post staff writer, finds is Charles Liteky, an ex-chaplain who won the Medal of Honor in Vietnam. He is now living in a San Francisco flophouse. Another is the one man from the author’s class who is still a priest. He serves today in a poverty-stricken Kentucky parish with only 50 Catholics. The church has undergone a profound change, and so have those who have tried, often futilely, to share and sustain its glory. This is a marvelous account of that change, beautifully written and deeply moving.” — People Magazine