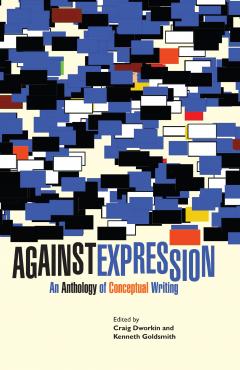 “Compiled by star practitioner Kenneth Goldsmith and lead academic liaison Craig Dworkin to be not so much a treasury of verse as an argument-by-demonstration, this anthology will excite the reader who wants more than normal literature gives her, as well as annoy — and, perhaps, haunt — the one who values her belief that normal literature gives her everything already.” — Los Angeles Review of Books

“One rarely likes to be told how to read, where to position a text in the context of its literary theory and formal practices, or who the writing owes its legacy to. However, one of the greatest strengths of Craig Dworkin and Kenneth Goldsmith’s Against Expression is that it does precisely that.” — Drunken Boat