The Difference Between You and Me 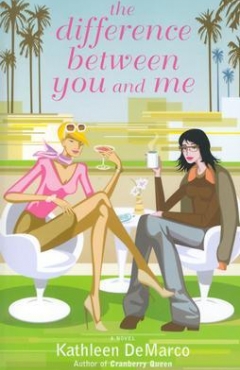 “DeMarco's follow-up to The Cranberry Queen (2001) is a frothy, fun look at the cut-throat world of Hollywood and what it takes to survive and thrive there. Josie O’Leary is a ruthless go-getter on her way up the ladder to becoming a producer. When she gets her hands on a golden script, she is deterred neither by being fired by the company she works for nor by her husband’s dual announcements that he has cancer and he is leaving her. On the other side of the country, Carla Trousse’s New York apartment literally caves in on her. At the behest of her aunt Paulette, she travels to L.A and is surprised by how much she likes it. Carla is hired at a production company by her old assistant, and has a run-in with Josie, whom she deems the worst person she has met in L.A. Unbeknownst to either woman, Carla’s aunt Paulette is going to drop a bombshell that will throw them together and change both of their lives. DeMarco’s second novel is perfect summer fare.” — Kristine Huntley, Booklist