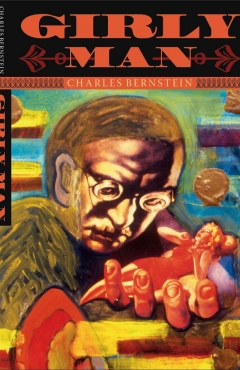 “Charles Bernstein’s pairs of jingles of public discourse are ‘simultaneous double narrative / the space between’s the other narrative/as if they're opposite.’ In the space between, outside representation but in the presence of it, we are provoked to laugh. Bernstein alters our language to open a double range that’s public and mind at once and inseparable, that is ‘Poetry is patterned thought in search of unpatterned mind.’ Girly Man is ‘doing’ it.” — Leslie Scalapino

“Bernstein has rattled the chains in close to 30 books of poetry and three spirited and quite wonderful books of essays. At the same time, and almost coincidentally, Bernstein has come up with a bracing way of being both a very political and a distinctly Jewish writer. Girly Man is perhaps Bernstein’s most approachable and focused collection. As a rule, his poems do not aspire to recount some experience that lies tantalizingly out of the reach of language. They have nothing to do with the tasteful matching of situation and epiphany...Bernstein’s poems insist on their unsettled surfaces, on the way they patch together incompatible levels of our everyday speech, from the most vapid self-affirmations to the densest inanities of professional jargon. The basic unit of Bernstein’s poetry is the exploded cliché or the dislocated fragment of conventional unwisdom....Bernstein has made a habit (and a career) out of questioning modern American poetry's love affair with personal experience and ‘voice.’ Now that his critique is something of an institution, it makes perfect sense that this poetic kochleffel should double back and try a cockeyed version of it himself. In Girly Man Bernstein is stirring it up again and — he would love this scrambled metaphor — adding something new to the mix." — David Kaufmann, Forward

“When we thought we had Bernstein pegged or that his work had possibly reached its limits, he emerges in Girly Man as a poet at the top of his form, capable still of the greatest modernist & postmodernist swervings, & for whom no form of expression is now entirely foreign. As with other poets of his rank (& that rank is very high), he has the ability to make categories dissolve & for himself, as poet, to become happily unclassifiable. From the comic to the archromantic, the avant-garde to the avant-pop, the formally constructed to the deceptively lawless, the personally political to the impersonally poetical, the poems in Girly Man are an example of what poetry can be in the hands of a supercharged & superrestless poet. Charles Bernstein is now more clearly what he has always been — a major poet for our time— & then some."  — Jerome Rothenberg