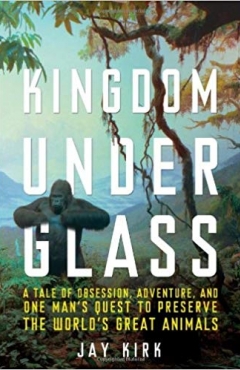 “One might say that an author who stumbles across the story of a man who wrestles a leopard to death, stuffs the first Jumbo for Barnum & Bailey, and perfects the art of mounting dead gorillas really can't go wrong. But Jay Kirk has created such a boisterously good-natured account of the life of the great taxidermist and conservationist Carl Akeley that a tale already well-nigh-incredible becomes in his hands just wonderfully sensational. This is a true gem of a book, well worthy of its extraordinary subject.” — Simon Winchester, author of The Professor and the Madman and Atlantic: a Biography of the Ocean

“Until reading Kingdom Under Glass I didn't think it was possible to use the words "fascinating" and "taxidermy" in the same sentence (at least not with a straight face)...but much of the book is about preserving dead animals, and fascinating it certainly is. This is thanks to gonzo narration by Jay Kirk, who has also written on travel and true crime. His prose is daring — sometimes even a bit wild — and he worms his way convincingly into the minds of his subjects.” — The Washington Post

“Kirk skillfully illuminates an era that saw ‘a dawning of sensitivity to the plight of wildlife’... The author shines in his reanimation of Africa’s inherent dangers as Akeley risked his life on safari battling ravenous leopards, charging elephants, five-hour hikes without rations and debilitating fevers — including the one that would take his life in 1926. The feral escapades of a creative wunderkind stitched together with novelistic zeal.” — Kirkus Reviews