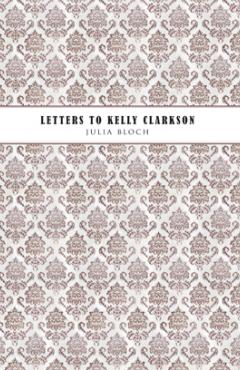 “As Julia Bloch turns her razor-sharp gaze to American Idol winner Kelly Clarkson, she adopts the beseeching tone of a fan and the intimate address of a best girl confidante. All women know what it’s like to be watched, but for Kelly, it’s that scary feeling upped a notch, like the viewers’ eyes have been pumped full of steroids. The gaze works both ways: the ghost of Kelly Clarkson follows Bloch everywhere, from San Francisco girl bars to Midwestern family reunions. For all their complexity of diction, there’s a touching simplicity to Bloch’s poems. By taking Kelly seriously, on her own terms, Bloch moves beyond the safety of ‘camp’ into a realm of genuine tragedy and love. It’s a stunning collection.” — Dodie Bellamy

“The letters posit Clarkson as container in which a multitude of cultural neuroses about femininity, desire, and the characteristics of reality fit, leaving readers feeling anxious about their own complicity in a system which venerates Clarkson’s emptiness.” — Sarah Burghauser, Lambda Literary

“In this book, ‘the battle isn’t outside’; rather, it is about the internal lives of women — and one woman in particular — struggling with the confines of ‘femininity’s dystopic embrace.’ While the narrator, Clarkson, and the book’s other women are constantly renegotiating their connections with (and disconnections from) one another and the world at large, their toughest struggles, Bloch implies, are within themselves.” — Chris McCreary, The Volta