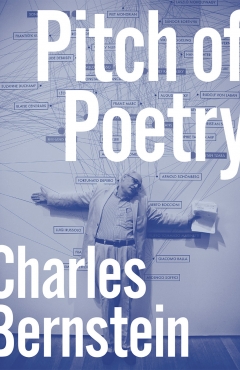 “The traits and energies that made Bernstein, the foremost poet-critic of our time, a leading figure of the 1980s-era avant-garde have continued unabated: a fearless willingness to challenge orthodoxy and to risk his own position by openly trying out new arguments and approaches; an original independence of thought; an uncannily prescient foresight; and a restless intellectual curiosity. In short: Bernstein’s genuinely experimental nature means that he is constantly proving new ground, reassessing the theoretical and poetical terrain, and revising even his own claims. In the process, he transforms our sense not only of the present but of the possible.” — Craig Dworkin

“Pitch of Poetry is wide-ranging, protean, exhilarating. Refreshingly polemical and polemically refreshing. As someone who has read Bernstein since his very first books, I am impressed most by his ability to retread his thinking and discover new angles to old routes. This is criticism that makes up its own rules and then doesn’t follow those either.” — Pierre Joris

“Berstein combines a sundry group of essays, interviews, and aphoristic think pieces to examine his arching interest in poetic delivery. . .the book continues the work of Bernstein's long, influential career, questioning the official narrative of verse culture while advocating for a broader consideration of the radical politics, international connections, and spirited debates that fill out the poetic project of the Americas.” — American Literature