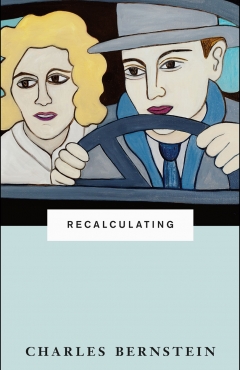 “The English word ‘calculate’ has a double life: in standard English it means to ‘reckon’ or ‘intend’ and in dialect it means ‘to guess.’ These contrary, wayward, definitions — the first so full of certainty, the second so full of ironic doubt — shimmer and clash on every page of Charles Bernstein’s obsessive, brilliant new book of poems, Recalculating. Through responses, translations, adaptations, and occasional pieces, through little hymns and tragic litanies, Bernstein measures and dreams a circle: a community of readers and writers who spin within a world built from the living history of words.” — Susan Stewart

“Recalculating gathers a substantial selection of (mostly) new poems — a few go as far back as the 80s and 90s — in a remarkably coherent and enlightening collection — though I’m certain Bernstein would abjure both of those adjectives. He has always rejected the idea of the poem as honed and polished object, and the poems in this book are as open as life itself. One thing that Recalculating makes clear is that, though Bernstein can deliver some ‘killer’ aphorisms, he is primarily a poet of abjection. He has always been drawn, as he puts it here, to the ‘painfully clumsy, clumpsy.’ Slapstick is bunkmates with failure and even heartbreak. This is especially evident in recent poems such as ‘Recalculating’ and ‘Before You Go’ which directly or indirectly reference the sudden death of the poet’s daughter. It is breathtaking — disturbing and admirable — that grief appears in these poems, as it does in life, alongside — well, alongside everything.” — Rae Armantrout

“For Charles Bernstein, historical works, interpretation, and adaptation all contribute to the cacophony of contemporary life. This collection contains a characteristically wide range of innovative verse, including formal stanzas with predictable end rhymes, columns of replicated phrases, essays in verse, axiomatic maxims, zen koans, and translations of Baudelaire, Apollinaire, and Catullus. Throughout, Bernstein usurps expectations and even anticipates, jokingly, how skeptical readers might receive his work: ‘I try to get them to see it as formal, structural historical, collaborative, and ideological. What a downer!’” — Booklist