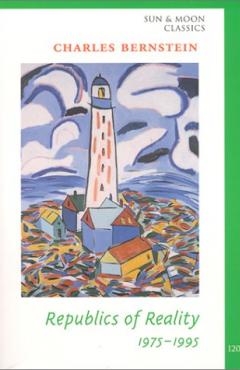 “At once the most paradoxically controversial and popular, accessible and most difficult of the L=A=N=G=U=A=G=E poets, Bernstein is also the writer of that group who strove early on to experiment with the extremes of its newly minted methods. Whether highlighting the synaesthesis of the word in its isolation or in the plain phrase as it operates in daily life to convey our most banal thoughts, this collection of long out-of-print chapbooks — none of these poems have appeared in any of Bernstein's many breakthrough volumes, such as Islets/Irritations (1983) or Dark City (1994) — provides a unique overview of his career, and adds to the range of his impressive canon of major and minor works. The first poem from the 1976 volume Parsing titled ‘Sentences,’ will surprise anyone expecting text-over-speech, as it is practically a litany of anxieties, attitudes and stuttering intensities. This attention to spoken language makes such dense works as ‘Poem’ (from 1978's Shade) both welcoming and discomforting, expressionistically cinematic but not without its moments of eye-wink satiric narrative. In the short poems collected in The Absent Father in Dumbo and ‘Residual Rubbernecking,’ Bernstein takes the project far from the austere fragments of the early works and deep into a purposely ‘purple’ and unbeautiful lyricism: ‘Such mortal slurp to strain this sprawl went droopy/ Gadzooks it seems would bend these slopes in girth/ None trailing failed to hear the ship looks loopey/ Who's seen it nailed uptight right at its berth.’ Bernstein always manages to find the furthest reaches of any norms of ‘good taste’ (be it mainstream or avant-garde), creating a poetics that reveals the social codes hiding behind all of poetry's tropes and forms. Though many of the later poems here seem unfocused and minor compared to the fabulous and ambitious early chapbooks, the volume as a whole presents as many promises as it does relevant problems, as many beauties as it does strange new imaginings.” — Publishers Weekly