The Saddest Toilet in the World 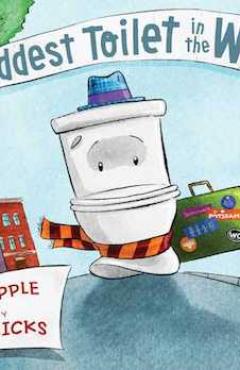 “One of the most creative toilet-training stories ever to make it to print. Danny, like many toddlers before him, is reluctant to touch his tush to the toilet. Understandably wounded by this flagrant rejection, despite Danny’s mother’s assurances, the toilet decides to pack up its things and disappear into the night. When Danny realizes that his throne is gone, he sets out to find it and promises to finally give it a try. Ricks’ hilarious cartoon artwork plays up the humor of a traveling toilet. The final scene shows the triumphant family, toilet in tow, going for a celebratory ride in a roller-coaster car labeled ‘#2.’”  — School Library Journal