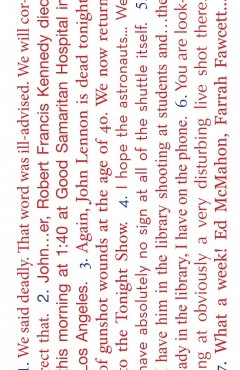 “It mingles the language of radio and TV commercials with sometimes bumbling, sometimes heroic reports from journalists filing their first draft of history.  Seven American Deaths and Disasters is of a piece with Mr. Goldsmith's provocative literary aesthetic.” — The Wall Street Journal

“The high priest of what he calls Non-Creative Writing, Goldsmith continues producing books from found texts—in the case of Seven American Deaths and Disasters, he transcribes radio transmissions announcing famous deaths and other bad news. His new book is a textual equivalent of Warhol’s Death and Disaster paintings, ripped from the front pages of the Daily News.” — Publishers Weekly

“Kenneth Goldsmith is always ahead of the curve!  Just when readers were becoming used to his “boring” transcriptions of weather or traffic reports, he here reverses the game by turning his attention to the extraordinary: seven cases of assassination, murder, sudden death, or terrorism and how such unforeseen events have been handled by the feckless and unaware media.  Seven Deaths is a real page-turner: you will feel you’re there, living through the horrific events as they unfold.” — Marjorie Perloff, author of Unoriginal Genius: Poetry by Other Means in the New Century