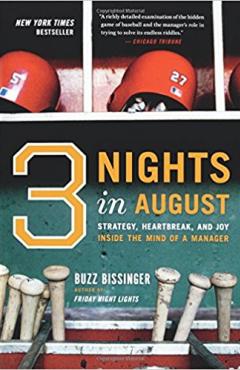 “Bissinger eschews the usual method of writing about baseball in the context of a season or a career, choosing instead to dissect the game by carefully watching one three-game series between the Cardinals and Cubs in late 2003. The Pulitzer-winning journalist and author of Friday Night Lights had unprecedented access to Cardinals manager Tony La Russa, as well as his staff and team, and he used that entrée to pick La Russa’s formidable baseball brain about everything from how he assembles a lineup to why he uses certain relievers. As the series unfolds, Bissinger reveals La Russa’s history and personality, conveying the manager’s intensity and his compulsive need to be prepared for any situation that might arise during ‘the war of each at-bat.’ Typical characters — the gamer, the natural, the headcase, the crafty old timer — are present, but Bissinger gives new life to their familiar stories with his insider’s view and cheeky descriptions (e.g., ‘Martinez’ response to pressure has been like a 45-rpm record, a timeless hit on one side, and the flip side maybe best forgotten’). Bissinger analyzes each team’s pitch-by-pitch strategy and gets the dirt on numerous enduring baseball questions: What does it feel like to have to close your first game in Yankee Stadium? Who knew about players using steroids before the current scandal hit? Do managers tell their pitchers to throw at hitters? Mixing classic baseball stories with little-known details and an exclusive perspective, this work should appeal to any baseball fan.” — Publishers Weekly

“Bissinger, whose Friday Night Lights celebrated high-school football in Texas, here explores baseball through the eyes of the St. Louis Cardinals’ current manager, Tony La Russa. A three-game series against the Chicago Cubs in 2003 frames the narrative, and provides an opportunity to explore the quirks of the contemporary game; clubhouses offer four flavors of sunflower seeds, for instance, while a Cardinals’ relief pitcher performs his pregame rituals in the nude.” — The New Yorker